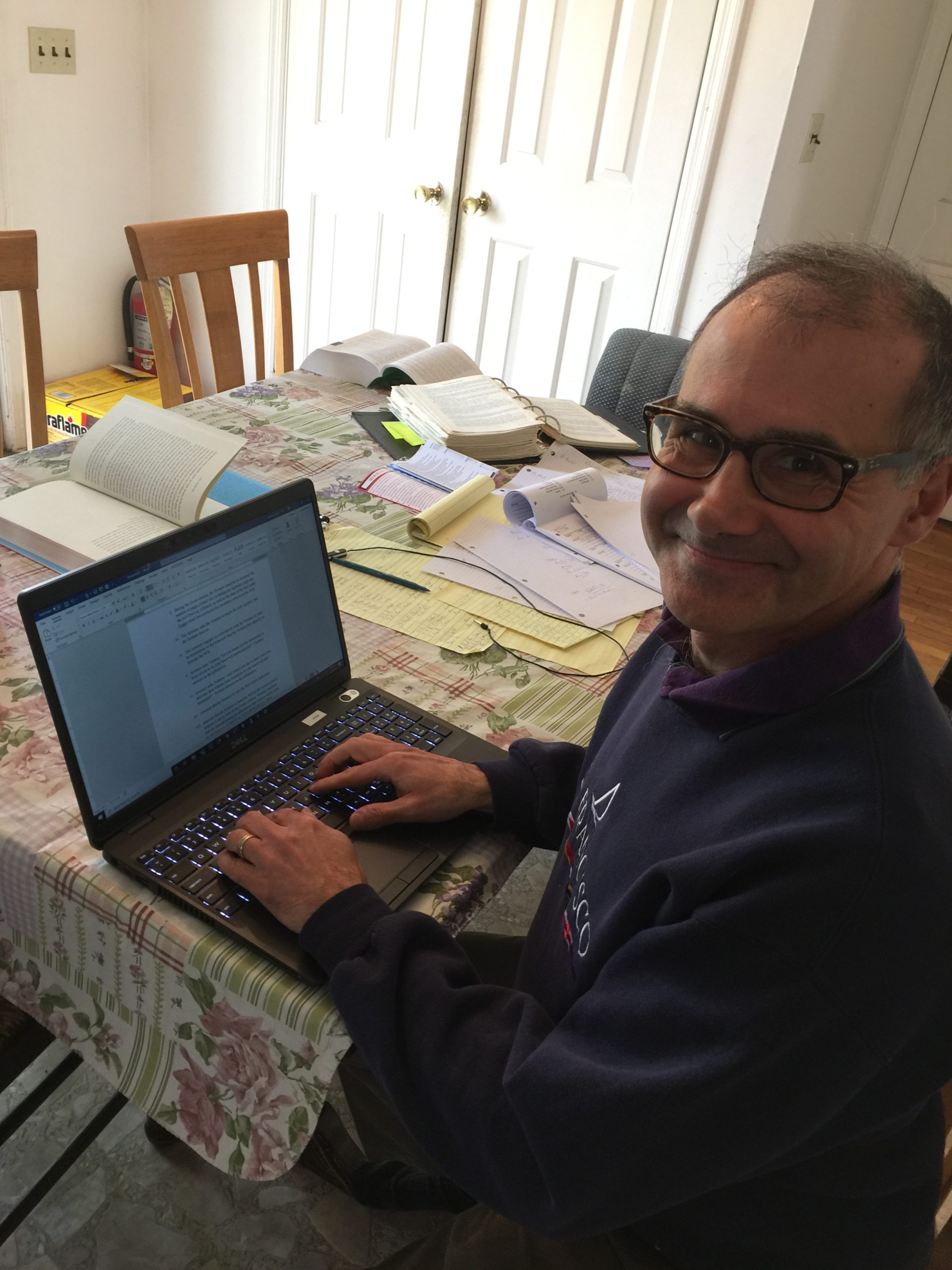 Michael joins McCarthy Fingar from Goldfarb Abrandt Salzman & Kutzin LLP, where he had been a partner for 18 years. He started his career in the Tax Department of Thacher Proffitt & Wood and tax boutique firm of Roberts & Holland LLP before segueing into Trusts & Estates and Elder Law. He has also served as an adjunct assistant professor at New York University, where he taught Law of Nonprofit Management for 15 years.

Michael is a skilled and thoughtful Trusts & Estates lawyer who works with clients to meet their planning needs.  He works with people with substantial assets and complex tax considerations, as well as people of more modest means and with family members with disabilities.

He is a “lawyer’s lawyer” – a professional looked to by other lawyers for advice and guidance.

In 2003, Michael was invited to testify about abuses in Adult Guardianships before the United States Senate Special Committee on Aging.

Michael is also an accomplished writer.  In 2005, he won the 2005 New York Law Journal fiction writing contest for his short story, “The Grannysnatchers.”

Michael has received a peer review rating of AV®Preeminent on Martindale-Hubbell®. Michael has also been recognized as a New York Super Lawyer in the areas of Estate Planning & Probate each year since 2015.

Michael S. Kutzin, a member of various groups, including our Guardianship Practice,  Taxation and Trusts & Estates groups, has Co-Authored an article entitled, “How “SECURE” Are You About Planning With Your Clients With Retirement Accounts? A Guide to Estate and Special Needs Planning After the SECURE Act”, published by the Elder Law and Special Needs Section of the New York State Bar Association.

During the COVID-19 health care crisis, McCarthy Fingar lawyers have remotely supervised the execution of many Wills, Trust Agreements and related documents. We are pleased to announce that Michael S. Kutzin, a member of various groups, including our Guardianship Practice, Trusts & Estates and Surrogate’s Court Litigation groups, has been named as a co-Chair of the NYSBA Joint Elder Law and Trusts & Estates Sections Task Force on Remote Notarization and Remote Witnessing of Estate Planning documents.

McCarthy Fingar lawyers represent clients in the most difficult guardianship cases. In Matter of A.A. v. A., 2020 NY Slip Op 03468 (1st Dep’t 2020),  Michael S. Kutzin, a partner of the firm whose areas of concentration include guardianship and trusts & estates, represented, on a pro bono basis, the mother of an incapacitated child in an appeal to the Appellate Division, First Department, of a lower court decision in which, after a divorce, the mother had been named the guardian for her daughter, J.A. Michael succeeded in having the father’s appeal denied on the grounds that the lower court had properly exercised its discretion in naming the mother as guardian and that he had no independent right to have his adult child brought to a physician of his choice to prove his case.

We are pleased to announce that Michael S. Kutzin has joined the firm as a partner and is a member of our Guardianship Practice, Trusts & Estates, Surrogate’s Court Litigation, Appellate Practice, Exempt Organizations, Taxation and Charitable Gift Planning groups. Michael joins McCarthy Fingar from Goldfarb Abrandt Salzman & Kutzin LLP, where he had been a partner for 17 years. Michael has extensive experience with all forms of Surrogate’s Court and Guardianship proceedings, from the most routine to the most complex and contentious. He has appeared in Westchester matters for years, as well as Surrogate’s Court and Guardianship cases in New York City.

How “SECURE” Are You About Planning With Your Clients With Retirement Accounts? A Guide to Estate and Special Needs Planning After the SECURE Act

McCarthy Fingar lawyers represent clients in the most difficult guardianship cases, including disputes over a guardianship of an adult child. While most people understand issues involving the care and custody of children is often front-and-center in a divorce case, sometimes even adult children with disabilities become collateral damage of a divorce as parents battle over guardianship of an adult child. This can happen for myriad reasons, including where well-meaning but ill-advised parents have a different vision for what kind of care the disabled child should receive. In Matter of A.A. v. A., Michael S. Kutzin, a partner of the firm whose areas of concentration include guardianship and Trusts & Estates, represented, on a pro bono basis, the mother of an incapacitated child in the appeal to the Appellate Division, First Department, of a lower court decision in which, after a divorce, the mother had been named the guardian for her daughter, J.A. The father had fought to become his daughter’s guardian and appealed the lower court decision, arguing that the daughter’s incapacity was brought on by the anti-psychotic medication that she was taking. The father further argues that he should have the right to take his daughter to a physician of his own choice, in his effort to demonstrate that it was the medicines that caused her illness. The mother, who had already prevailed in Family Court against such allegations when she obtained custody while the child was a minor, was named guardian in the lower court proceeding. Michael succeeded in having the father’s appeal denied on the grounds that the lower court had properly exercised its discretion in naming the mother as guardian and that he had no independent right to have his adult child brought to a physician of his choice to prove his case. The First Department uphold the lower court decision, finding that the mother “had been diligently caring for [the daughter] for years and appropriately attended to her needs, and the absence of any evidence supporting plaintiff’s claims of improper medical treatment . . . “

Transfers of assets using a power of attorney often lead to conflict. The question is whether the transfer by the agent under the power of attorney was in the best interests of the principal. In Matter of Argondizza, 168 A.D.3d 426 (1st Dep’t 2019), Michael S. Kutzin succeeded in having the Appellate Division uphold the Surrogate’s Court in dismissing the claim brought by two children in a property turnover proceeding against their stepfather. Here, the Surrogate’s Court rejected the argument that the stepfather breached his fiduciary duties when, as an agent under a power of attorney, he transferred a co-op he co-owned with his wife into his own name. In this case, the decedent had told her treating physician that it was her desire that the co-op be transferred into her husband’s name, the transfer was being done in order to obtain eligibility for Medicaid coverage of long term care, and the children were aware of and took part in the transfers.

Not all probate proceedings are created equal. In 2018, after taking over from prior counsel, Michael S. Kutzin succeeded in having a will admitted to probate that clerks in the New York County Surrogate’s Court referred to as one of the most complex uncontested matters that they had seen. In that case, the decedent, who was unmarried and had no children, had filed a prior will in the court which had a series of unusual provisions, including a trust for the benefit of first cousins once removed living in Ireland and England. She also had a large extended family in the United States and abroad. To complicate matters further, numerous beneficiaries and interested parties died after the decedent did but before the will was admitted to probate, making the probate particularly difficult. Nevertheless, through hard work and determination, Michael succeeded in having the will admitted to probate.

Guardianship cases are designed to be flexible tools to protect the interests of an incapacitated person. Sometimes, however, people forget that and become more concerned with technical compliance with the law than with protection of the incapacitated person. In January, 2020, Michael S. Kutzin persuaded a judge in Manhattan, over the objections of the City of New York, court appointed counsel and an institutional temporary co-guardian that the brother of the incapacitated person acted properly in relocating her from New York to Oregon without prior court approval when her safety was endangered. The incapacitated person, who lived alone, had no memory and little understanding of her circumstances, brought a young man into her apartment late at night. The young man was recorded in security cameras leaving the apartment very early in the morning. The Court agreed that, in the absence of any support systems in New York, the brother, who was also co-guardian, acted properly in removing his sister to Oregon to be closer to her father and family members, and approved his request to have the guardianship transferred to Oregon.

Physical distance and family hostility created a situation in which an elderly woman’s health care had become compromised. In 2019, Michael S. Kutzin  represented a longtime family friend of the elderly woman in obtaining guardianship for client who had a lifetime relationship with the elderly woman, and obtained the revocation of a Hawaiian daughter’s health care proxy. The Hawaiian daughter had a hostile relationship with a New York daughter who had attempted to provide care for their mother. The health care agent directed medical providers not to listen to the New York daughter and to keep their mother’s medical information from her. As a result of the conflict between the daughters, their mother’s medical care had become compromised. For various reasons, the New York daughter was not a suitable candidate to become guardian of her mother, so, at the mother’s request, the friend intervened. A Manhattan agreed with Michael’s argument that the hostility between the daughters put their mother’s care at risk, and found that the longtime family friend was the most appropriate person to serve as guardian.

Testimony of Witnesses on Due Execution

Surrogate’s Court litigators know that getting the facts is essential to success in a will contest. Michael S. Kutzin obtained a substantial settlement on behalf of a nephew even though it was clear that his client’s uncle intended to disinherit him. In that case, the uncle prepared his own will and had two elderly neighbors witness his signing. Emails from the uncle indicated that he had reasons to disinherit his nephew and that he had the necessary legal capacity to sign a will. When Mr. Kutzin took the will witnesses’ depositions, however, their memory (or lack thereof) of the events in question left it unclear what exactly was signed in their presence and whether the requirements for due execution of a will were met.

Sometimes family members are named as co-executors of Wills but cannot work together. If the dysfunction is egregious and results in harm to the Estate, there may be a need to seek the removal of one of the co-Executors. In Surrogate’s Court, Kings County, Michael S. Kutzin, in a proceeding to remove an executor, obtained the removal of the sister of one of the two co-executors. Here, the sister would not cooperate with her co-executor in selling real property to pay estate taxes, changed addresses without notifying the Court, and did not deny that she was suffering from dementia. Moreover, she would not cooperate with the co-executor with making necessary repairs of other real property held by the Estate to prevent waste. As a result, the Court ordered the revocation of her letters and the issuance of letters testamentary solely to the brother.

When beneficiaries of trusts have needs, sometimes they need counsel to compel trustees to make distributions.  Here, a beneficiary of two trusts lacked medical insurance and desperately needed money to pay for expensive cancer care. The trustee of both trusts refused to provide the funds, in part on the grounds that it was more appropriate for the funds to be paid from the other trust. Michael S. Kutzin brought a petition in Surrogate’s Court, New York County, to request that one of the two trusts be compelled to provide the necessary funds on an emergency basis. The Surrogate’s Court ordered the corporate trustee of the larger of the two trusts to make the necessary payments on the beneficiary’s behalf.